Jimin embraces her identity and the cultures that have influenced her. By chance she was researching the modern girl during South Korea’s enlightenment period of the 20th century and found out she shared lots of similarities with those women. Working with the traditional Korean knotting technique, she applied it to her textiles and used it to provide shape to her garments. Her goal was to use this technique not as mere decoration, turning it into the key ingredient for the development of the outfits. This allowed her to visually and technically infuse her collection with meaning and history. 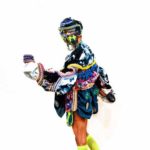 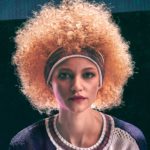